The bus ride from Bacolor Pampanga to the tip of the province of Bataan was quite a ride. The travel was about 2 hours and we slept and watched the scenery as we passed through the highway.  It was almost 4pm when Pabz and I reached the terminal and we walked around the town. The streets were small and its rush hour that’s why there were plenty of people who were walking around, some from work and most from schools. Thinking this was an old town we asked several people about the town church. But before I started talking about the church here is the start of the history of Mariveles. 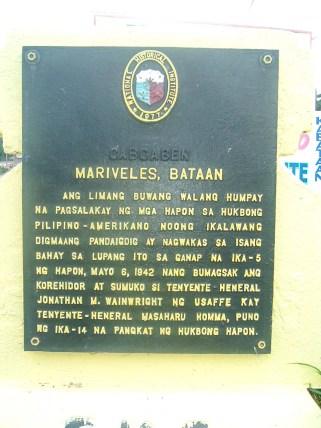 Entrance to the town

“Originally known as the “Village of Kamaya”, it was founded as a pueblo by a Franciscan Friar in 1578 and was made part of the Corregimiento of Mariveles which includes the towns of Bagac and Morong, the Island of Corregidor, and the town of Maragondon in Cavite.

In 1754, Governor General Pedro Manuel de Arandia issued a superior decree that created the Province of Bataanthat included the “towns of Orion, Pilar, Balanga, Abucay, Samal, Orani, Hermosa, Dinalupihan, and Mariveles. All were former towns of the province of Pampanga. Because it is strategically located on the mouth of the Manila Bay, Mariveles was an important stopover for sea voyagers. Even the legendary Chinese pirate Limahong had made Mariveles a port of call.”

We were disappointed to see the church of St. Nicholas Tolentine, originally established in 1729. It was a brand new church and there was no reminiscent of the old one. So I figured out that this town was relatively new. But there were plenty of things that had happened to this town and here is the continuation of its history.

“The Eighty Years’ War or Dutch War of Independence spilled over in the Orient. Being a colony of Spain, the Philippines was dragged into this protracted war between its colonizers and the Dutch and none has been more fierce than the Battles of La Naval de Manila in 1646. The earliest and final days of this naval conflict were staged in the waters of Mariveles. In 1600 and 1609, the Dutch invaded Mariveles in their attempt to establish a commercial sea route along Southeast Asia.” 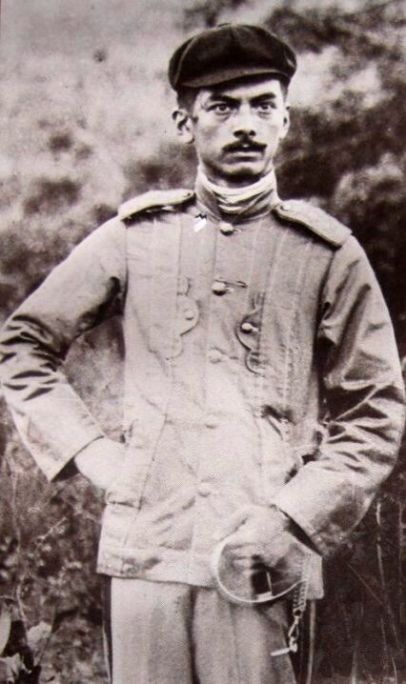 During the Philippine-American War, it was in Mariveles where Major Manuel L. Quezon, aide-de-camp of General Emilio Aguinaldo, surrendered to the Americans. On March 29, 1904, General Artemio Ricarte was arrested in Mariveles, Bataan by the Philippine Constabulary.”

There weren’t a lot of things to see so walked around the banks of the bay and saw strange statues in the horizon by the tip of the peninsula. So we took a tricycle and reached the Station of the cross.  It seated on the small village, and statues seemed unfinished. So walked up the stairs and looked at them and as these holy relics picked our curiosity. The statues ranges from giants to life size. There seems no pattern just random holy relics such as the giant mother Mary, the three Jesus, various saints and angels. As this place arouse our curiosity here is the continue history of the town.

“When the Philippines fell to the Americans at the turn of the 19th century, Mariveles was placed under American rule. They established the country’s first quarantine station in the old Spanish Leprosarium Hospital to check all incoming and outgoing shipments from any communicable and deadly diseases from spreading. Today, this quarantine station is converted to a National Mental Ward.

Before the Second World War broke out, Mariveles Naval Base was established and completed on July 22, 1941. It was used by the Asiatic Fleet of the US Navy.

On April 8, 1942, Major General Edward P. King, Jr., the commander of USFIP in the Peninsula, had resigned to the fate that Bataan could no longer wage a fight against the rampaging forces of the Japanese Imperial Army. It was in Mariveles that indeed Bataan has fallen! The arduous, ignominious, infamous Bataan Death March started two days later.”

That history led to the rise of the town’s prominence. It was famous during the Battle of Bataan in 1942 and its aftermath. I will talk more about that events later as for now we enjoy looking at the crucifixion, mother Mary and our greatest accomplishment; climbing on the giant Jesus. We took several pictures there and finally take a tricycle back to the town proper.  So here is the end of the history of the town.

“On June 21, 1969, President Ferdinand E. Marcos signed Republic Act No. 5490, creating a special economic zone in Mariveles, Bataan, the first in the Philippines. This has made Mariveles, Bataan a bustling municipality today.”

In ending of our adventure for today here is the history that made Mariveles infamous, the prelude to the Bataan Death March.

“The day after Japan bombed the U.S. naval base at Pearl Harbor, on December 7, 1941, the Japanese invasion of the Philippines began. Within a month, the Japanese had captured Manila, the capital of the Philippines, and the American and Filipino defenders of Luzon (the island on which Manila is located) were forced to retreat to the Bataan Peninsula.

For the next three months, the combined U.S.-Filipino army held out despite a lack of naval and air support. Finally, on April 9, with his forces crippled by starvation and disease, U.S. General Edward King Jr. (1884-1958), surrendered his approximately 75,000 troops at Bataan.

The surrendered Filipinos and Americans soon were rounded up by the Japanese and forced to march some 65 miles from Mariveles, on the southern end of the Bataan Peninsula, to San Fernando. The men were divided into groups of approximately 100, and what became known as the Bataan Death March typically took each group around five days to complete.

The exact figures are unknown, but it is believed that thousands of troops died because of the brutality of their captors, who starved and beat the marchers, and bayoneted those too weak to walk. Survivors were taken by rail from San Fernando to prisoner-of-war camps, where thousands more died from disease, mistreatment and starvation.”

This white marker represents each kilometer the soldiers had to endure until they reach the San Fernando train station. You will find it along the highway.

Here are links for more information: