We have been driving around to search for California Historical Markers around the Santa Clara-San Jose area but instead, we decided to head southward towards San Benito County. My sister, Deelow and I went to Hollister and San Juan Bautista, searching for historical markers in Fremont Peak. We reached the entrance to the park but couldn’t find any markers so we continued on; however, we didn’t know what we got ourselves into. We thought it was going to be a short drive but we underestimated and so after passing through countless forests of trees, we were finally up the hill with the paved road turning to dirt.

Entrance to the park

Before we knew it, we were up on the mountains, meeting up with two vehicles that were on their way down. Since we already arrived, we decided to circle around until we finally reached the area with shaded trees, picnic tables and a parking lot.
After parking the car, we walked around, trying to locate historical markers but didn’t find any official ones. There was a historical writing ,

“Fremont Peak was called Gavilan Peak in early Spanish times Gavilan in English, meaning “hawk.” In 1846 Capt. John Charles Fremont, brevet captain of topographical engineers of the United States Army is conducting a survey and exploring expedition in Oregon and California. His presence with an armed force in the settled area was objected by Prefect Manuel Castro and General Jose Castro and the California authorities. He was ordered to leave, instead Fremont prepared to resist this request. He ascended Gavilan Peak where he built a fort of logs. A sapling was cut for a flagpole of the United States. Castro had his force below at San Juan Bautista. But before any attack was made, Fremont’s flagpole blew down on the afternoon of March 9

Fremont taking this as a bad omen broke camp in the night and moved on toward the San Joaquin. So open battle was avoided and after this episode, Gavilan Peak again became the meeting place for hawks. Elevation 3169 feet.” 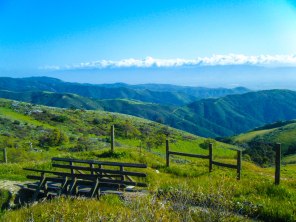 Afterwards, we walked around the picnic area and spotted some empty vehicles. I was ready to leave but my sister told me we should at least take a hike, since we’ve already accomplished everything on our list for today. Besides, the view was irresistibly beautiful. Thus, we followed the pathway to the trail which I couldn’t recall very well.

First, we went inside the huge boulder and located in the corner was the grass trail, leading us up to the peak. We climbed up stairs made of rock and walked pass the edge of the mountains where there were rocky areas that were hard to climb. The sun was on its peak too and it was hot even though there was a breeze but we managed to find some shades underneath some of the scattered trees nearby.

There are also some information regarding the vegetation in the area such as the Poison Oak, “The shiny leaves of this shrub grow in groups of three on smooth stems.

They are green until fall when they turn various shades of red and orange. Do not touch the stems or leaves, fro the oil of this plant is toxic to humans and may cause a severe rash or blister’s. Sometimes poison oak will as a vine in the trees.” To us, this is useful information in this unknown territory.

Finally, we reached the peak where Captain Fremont and his men raised the flag of the United States of America. In remembrance of his monument by the entrance of the park, there is a brief information of who Captain Fremont was:

John Charles Fremont was a naturalist, explorer, scientist and captain with the U.S. Topographical Engineers on this third expedition to the West when he camped on this mountain. His assignment was to survey, map, chart trails and find the shortest route between the East and West for the U.S. Government.

Besides his military activities in California, Fremont is remembered for giving San Francisco’s “Golden Gate” its name; He was the military Governor of California fro 50 days; He was the first U.S. Senator to be elected from California; He won the Republican nomination for the Presidency; and he was a Major General in the Civil War and was Territorial Governor of Arizona.

Fremont’s friends called him :”The West’s Greatest Adventurer,” “A Man Unafraid,” “The Pathfinder” and “The Pathmaker of the West.”

The peak was breathtaking and spectacular that others even said you can see the Monterey Peninsula from here; however, for some reasons, I wasn’t able to see it. Nevertheless, we really enjoyed the view with the breeze blowing into our faces. We successfully accomplished our first real hike with the beautiful view being our perfect reward.

Deer in the park 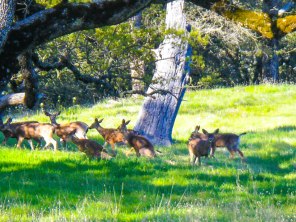 On our way back, we passed by the satellite area but it was dangerous walking downwards than upwards, so we had to take extra precaution. When we reached the parking area, we saw some deer running around and it was nice to see these animals roaming freely, not afraid of humans. The journey ended as we drove down the mountains back to civilization, feeling a sense of accomplishment even though we couldn’t find any historical markers. (After researching online, I found out its located in Abbe Park in the downtown of San Juan Bautista).

Photo of Cap. Fremont courtesy of this site:

One thought on “Fremont Peak, California”