After our breakfast to Cafe du Monde and looking around Jackson Square and Artillery Park, we moved on to our next destination, the Steamboat Natchez. Its Ta Vans turn to choose what she wants to do for the day so with Mom, her, Deelow and I walked at the river pathway leading to the steamboat.  It didn’t take that long before we caught a glimpse of the Steamboat on the docks. It was by Toulouse Street Wharf behind Jax Brewery. There was a tarpaulin in front of and a booth. People were already lining up for the 11:30am departure. Ta Vans bought our tickets which was $44 per person.

We took a couple of pictures in front and then head to the line. By 11:00 they started the boarding and we were in the middle so we weren’t sure if we were going to get a good seat considering it has been dark and raincloud isn’t far. Before we climbed, it is mandatory to take a group picture so we did and then to the ramp of Natchez. Here is the beginning of the history of the Natchez while we try to look for a place to sit.

“She’s the ninth steamer to bear the name NATCHEZ. It was her predecessor, NATCHEZ VI, that raced the ROBERT E. LEE in the most famous steamboat race of all time. Even today, the NATCHEZ is proudly the undisputed champion of the Mississippi, never having been beaten in a race. In many ways, she’s the best of her line.

Ramp to the steamboat

It’s a line that follows the course of river history, from the placid antebellum plantation era through the turbulence of the Civil War to the Gay Nineties, and, ultimately, the new millennium.

When the New Orleans Steamboat Company launched the NATCHEZ in 1975, they revived more than a famous name. They created one of only two true steam powered sternwheelers plying the Mississippi today. The NATCHEZ combines the best of contemporary construction, safety, and comfort standards with all the authenticity and style of her classic steamboat Gothic predecessors.”

Ta Vans and Mom found a table by the rails in the front of the second story with a roof, facing the city of New Orleans. Securing our seats and the boat departing the docks Deelow and I decided to explore the rest of the Natchez. Dad reminded us that we should videotape everywhere we go to. So Deelow took the camcorder and we headed on.

Body of the steamboat 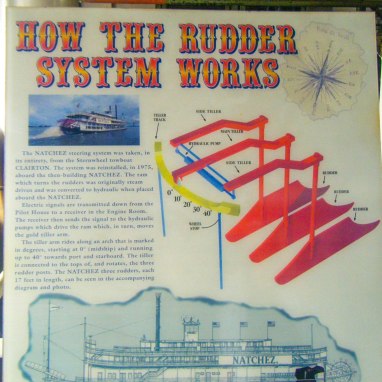 The Steamboat consists of three stories not included was the basement or bilge and the tower (pilot house) of the steamboat. We first went to check out the first story. So finding the stairs we walked down and back to the stern of the ship where the Paddlewheel was. Then around to the Magnolia Suite which was close. So we went next door which was the Boiler Room. We went in and saw some of the crew working on the engines. Then we went to check out the signage around for more information.

“How the Rudder System Works

The NATCHEZ steering system was taken, in its entirety, from the Sternwheel towboat CLAIRTON. The system was reinstalled, in 1975 aboard the then-building NATCHEZ. The ram which turns the rudders was originally steam driven and was converted to hydraulic when placed aboard the NATCHEZ.

Electric signals are transmitted down from the Pilot House to a receiver in the Engine Room. The receiver then sends the signal to the hydraulic pumps which drive the tam which, in turn, moves the fold tiller arm.

The tiller arm rides along an arch that is marked in degrees, starting at 0″ (midship) and running up to 40″ towards port and starboard. The tiller is connected to the tops of, and rotates, the three rudder posts. The NATCHEZ three rudders, each 17 feet in length, can be seen in the accompanying diagram and photo.”

After reading the information on the couple of signs we moved on and nothing else to see at the first floor we went back to the second floor back to our seats. We watched with our companions as we leave the city behind us with only the steeple of the cathedral visible. The wind was blowing in our faces while the visitors where busy talking.  Being too crowded Deelow and I moved to starboard side of the steamboat.

We went to where there was no roof but plenty of empty chairs facing the open air and the Mississippi River underneath us. We could see the skyscrapers on the other side of New Orleans and as we relish the air and the experience of being in a steamboat here is the continuation of the history of the Steamboat Natchez.

“The NATCHEZ resembles the old sternwheelers VIRGINIA and HUDSON in her profile and layout. Her powerful steam engines were built for U.S. Steel Corporation’s sternwheeler CLAIRTON in 1925. Her genuine copper and steel steam whistle is a treasured antique. Her copper bell, smelted from 250 silver dollars to produce a purer tone, once graced the S.S. J.D. AYRES. Her 32 note steam calliope was custom crafted and modeled after the music makers of the Gilded Age.

The NATCHEZ is the pride of the Mississippi River and is as beautiful as any of her namesakes. Many of her crew have been with her since her maiden voyage. Theirs is a whole new chapter in history of the river, and you can be a part of it. Her daily two-hour jazz cruises depart from the Toulouse St. Wharf (behind JAX Brewery in the French Quarter) at 11:30 A.M.; 2:30 P.M.; and 7:00 P.M.”

Then it started sprinkling again so we had no choice but to go back in. We sat with Mom and Ta Vans and the host on the speaker point to us the ships and areas we passed by such as Cape Knox and Kennedy, the Domino Sugar Chalmette and finally the Chalmette Battlefield. 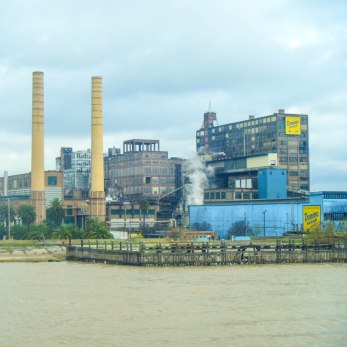 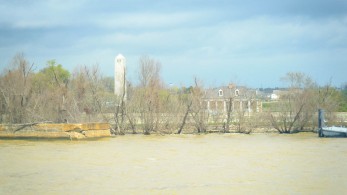 From then the Steamboat made a U-turn heading back to the city. Then we were called to the dining area for our Jazz Buffet Brunch.  We went in and in line to get our Creole dishes which were plenty such as gumbo, breaded fish, beans, bread, salad and more. While we listened at the Jazz Music of which was excellent in my opinion. It was all lively and beautiful as if we were back during the 1920s. We came back and forth until we were all full.

After that we went back to our seats outside by the railings and watch as we passed by the similar landmarks we saw earlier and finally we saw the steeple of the St. Louis Cathedral and passed by our next destination Aquarium of the Americas as the steamboat makes it parallel parking back to the docks. We waited until the steamboat comes to a still and here is the rest of the history of the Natchez.

“True to tradition in every detail, boarding the NATCHEZ makes you feel as if you have entered another era. The captain barks his orders through an old-time hand-held megaphone. The calliope trills a melody into the air while the great wheel, 25 tons of white oak, churns the heavy waters of the Mississippi. You soon find yourself slipping into a sense of the old, vast and timeless river. 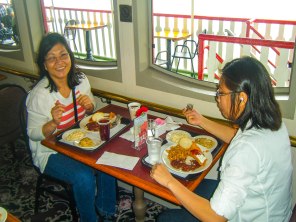 As the NATCHEZ glides past the French Quarter and through one of the world’s most active ports, you begin to understand the magic of the experience. For all its history and romance, the excitement of riding a steamboat is as real and rich and genuine now as it was a century ago.”

Then we boarded down and check our pictures on the booth and bought the complete set with a folder and 2 small versions. We walked down the river banks to our next destination. And as I thought that I could finally say I sail the Mississippi River on a steamboat, reliving the old historical days of the South with the music of the Jazz which makes New Orleans one of the prize jewels of the South.