The most prominent landmark in Utah and the Mormon faith is the Salt Lake Temple. We parked by the Park Place beside the Temple square and we walked out and cross the street. It stopped snowing and the streets were crowded with both locals and tourists. The Christmas season filled the air with its beautiful yuletide decors and the attractions around the area.

“Four days after the LDS pioneers entered the Salt Lake Valley in July 24, 1847, Brigham Young planted his walking stick at a certain point while traversing the ground with some associates and exclaimed, “Here we will build the temple of our God.” (Gates, p. 104). It was through divine inspiration and reflecting on this experience, President Young said,

“I scarcely ever say much about revelations or visions, but suffice it to say…I was here, and saw in the spirit the temple…I have never looked upon that ground, but vision of it was there.”

Construction on the temple began on February 14, 1853, with Brigham Young turning the first shovelful of dirt in ground-breaking ceremonies. That April 6, the cornerstones were laid, following the pattern established for temples by Joseph Smith (cf. TPJS, p. 183). By this date, Truman O. Angell and William Ward, architect and assistant, had completed plans for the foundation and part of the basement, and Brigham Young had approved them. Sandstone from nearby Red Butte Canyon provided the basic material for the foundation and footings. The great walls of the building were to be granite from a vast mountain deposit in Little Cottonwood canyon about twenty miles away.

The foundation was completed in 1855, and some granite blocks were assembled on the site. Then, in 1858, under threat of an approaching U.S. army unit (see Utah Expedition), the Saints evacuated Salt Lake City and temporarily moved southward. They buried the foundation of the temple, leaving the appearance of a plowed field.”

“Stonecutters usually worked in teams to cut large stones. First they drilled a series of holes using sledgehammers and chisels. Then they inserted slips and wedges into the holes and struck them each in turn until the stone split. These smaller stones were then hewn into blocks ready for transport.”

“Work on the temple was not resumed for several years. Some deterioration of the foundation was discovered when it was re-excavated, and replacements were made with stone of the best quality. The exterior walls from the ground up, eight feet thick at ground level and six feet thick at the top, were painstakingly prepared and fitted from solid granite. 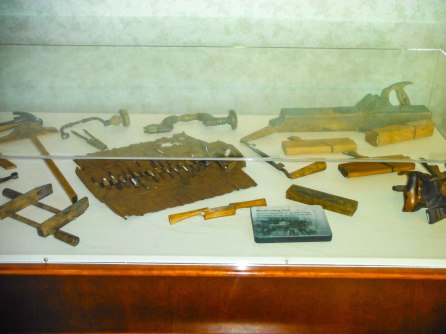 Transporting the granite from the mountain quarry proved to be a severe challenge. The builders tried using a wooden railroad spur, a canal, special roads, and even a uniquely constructed wagon. Although it was less than forty miles, a round trip required four days. The arrival of the transcontinental railroad in 1869 and the later laying of a spur into the canyon for mining purposes resolved the transportation problem.

As many as 150 men worked on the temple at any given time. During the forty years from the beginning to the end of the project, they also completed the construction of the great domed Tabernacle, the Assembly Hall, the Temple Annex, and a 15-foot-high wall that, a century and a half later, still sequesters Temple Square from the city that surrounds it.”

There is a lot of information to be seen in the Visitor Center so to have a detailed story of the building and history of the temple here are the following.

“Cyrus E. Dallin, a noted Utah-born sculptor, created the gold leafed statue of the angel Moroni for the center east tower at the invitation of President Wilford Woodruff. The artist said of the experience, “I considered that my Angel Moroni brought me nearer to God than anything I ever did. It seemed to me that I came to known what it means to commune with angels from heaven…. We can only create in life what were are and what we think.”

office of the architect

“Though furnishings have been updated since the dedication in 1893, the furnishings in this display exemplify the fine workmanship still present throughout the Salt Lake Temple.”

“Entrance to the temple for patrons is through an annex outside the main building. For the instructions and ordinances within, a processional plan is followed through several rooms, each signifying a stage in man’s path of eternal progression. Each room is decorated with murals depicting that stage of the journey.

interior of the temple

First is the Creation Room, where the creative periods of the earth are considered. Next, the events of Eden are the subject in the Garden Room. The World (or Telestial) Room depicts conditions following the expulsion of Adam and Eve from the Garden of Eden, providing a background for the Atonement of Christ, the great apostasy, and the restoration of the gospel. 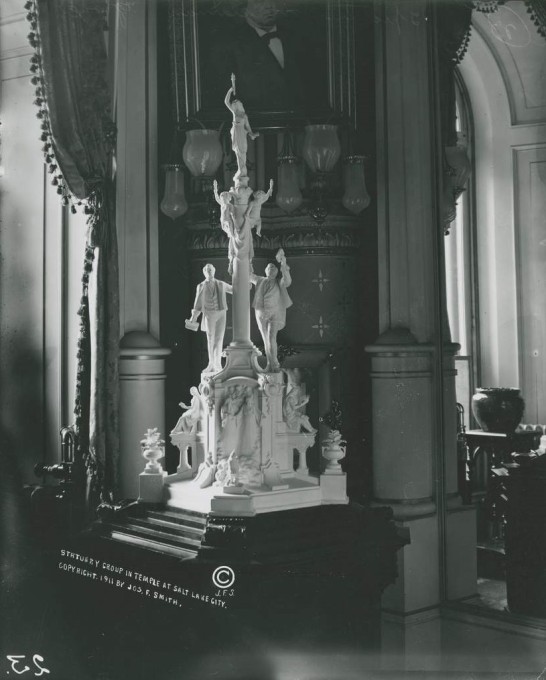 In the Terrestrial Room, the requirements of the pure life and of complete commitment to the work of the Lord are taught. The path then leads through the veil of the temple to the Celestial Room, representing the “heaven of heavens,” the glorious kingdom of God. On this level also are small rooms with altars for marriage and sealing ordinances. 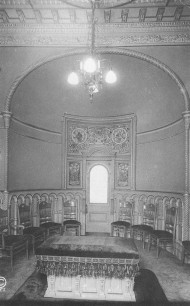 The building also includes in the lower area a baptistry, and on other levels, a large assembly room, rooms where the leaders of the Church meet, lecture rooms, administrative offices, and dressing rooms.”

“The desk, bookcase, and stool are replicas of furniture used by architect Truman O. Angell when he prepared detailed plans for the temple. He also supervised the work of construction crews on the Temple Block and devised a numbering system to identify and order each stone for proper placement in the rising temple walls. These architectural drawings show details of the Salt Lake Temple.”

The exhibit mostly shows the beginnings of the temple and how it was built. After that we went out and look around the premises. Unfortunately, the temple was closed and we were not allowed to enter. But it was still beautiful with the snow covering the sides of it.  The whole building was a symbol like the six major towers and finial spires shows the restoration of priesthood authority.

Earth stones, sun stones, moon stones, star stones, cloud stones penetrated with rays of light, the all-seeing eye, the clasped hands, Ursa Major pointing to the North Star, and the inscriptions “The House of the Lord” and “I Am Alpha and Omega” all appear on its exterior. While we looked around here is the rest of the history of the temple.

Mural in the corridor

“The capstone was laid April 6, 1892, one year before the dedication, amidst a tremendous spiritual outpouring of appreciation and anticipation. After the large spherical capstone was put in place, the people unanimously adopted a resolution to complete and dedicate the building one year from that date. That afternoon, the 12-foot-high gold-leafed copper statue representing the angel Moroni was placed on the central eastern spire, anchored through the capstone with huge weights suspended into the tower below.

The temple was completed within the year, and the dedication was held on the appointed date—April 6, 1893—forty years after Brigham Young laid the cornerstone. More than 2,250 people crowded the large Assembly Room on the fourth floor of the temple for the first of twenty-three dedicatory sessions that continued over almost three weeks. Many reported having spiritual experiences at the dedications. President Wilford Woodruff offered the dedicatory prayer, and the hosanna shout and original inspirational music were rendered. The sacred celebration was concluded with the singing of a special hymn saluting the sentiments of the people: the Hosanna Anthem.”

Ending the tour we knew that though there were plenty of temples around the country. The members still travelled near and far to be married or sealed as families in commemoration to their ancestry. It was very significant  because that was where the highest quorums of the priesthood where held which was monthly.

Statues at the front 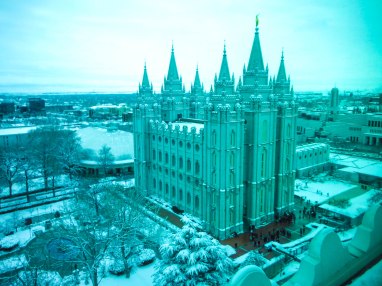 from the Joseph Smith building

The temple was so beautiful and can be considered as the symbol of Mormonism. It was a religious site and yet work of art. A symbol of once oppress people, who were judge because of their beliefs. They have to travel far from their homes to the West to freely practice their religion. The Temple square was a testimony of it. It was a one in a million adventure.

We ended our tour by going to the Joseph Smith Building to look around and to have a meal.

Here are the links for more information and pictures: