The driving was beautiful and yet painful. I didn’t feel carsick at all but my companion, Laura did. The roads were small and winding but nevertheless, the scenery was breathtaking. While being in the wilderness, you barely pass by any vehicles. Trees, mountain and small towns will greet you on your way. 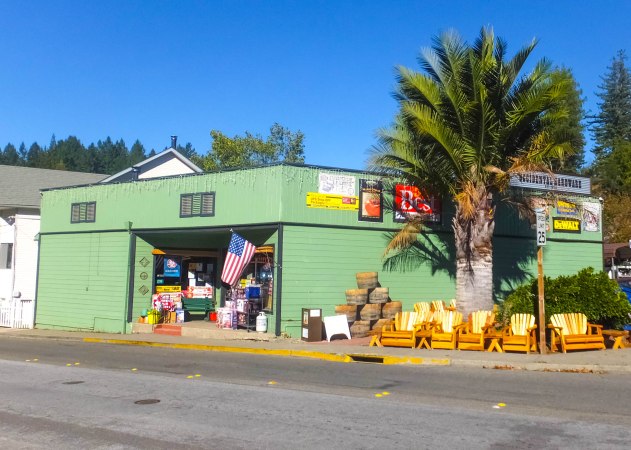 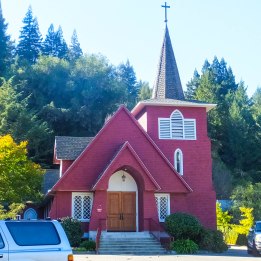 During our journey, Laura and I headed to Fort Ross after our previous destination, which was about 2 hours apart. Since it was almost lunchtime and there were no fast food restaurants in the area, we decided to stop by the next town, the Occidental. This is a very small town that it will take you less than 2 minutes to be able to drive through the entire downtown.

We walked around and came across The Union Hotel Restaurant, the place we had lunch at. It was one of the few big buildings in downtown so we went in and sat at the patio garden where the waitress attended us. Now, a brief history of this restaurant from their website:

“The history of the Union Hotel is more than the story of Occidental and the family that has called this Italian restaurant their own for five generations. The Union Hotel is also an important piece of history for each of the families that has dined and celebrated their special occasions at these restaurants.

On May 10, 1879, Dutch Bill Howard sold Lot #6 to Amelia Jones. The Jones family built a two story structure on this site and soon resold the property and building back to Howard for $1,000. By August of 1880, Dutch Bill had leased out the first floor for use as a general store and the upper level became a Public Hall. Howard later sold the building to Giovanni Gobetti and his wife Giovanna in 1891 for $2,000 in gold. The Gobetti’s named their business the Union Saloon and operated it as a drinking and eating establishment for nearly 35 years. In 1925, Giovanna sold the Union Saloon to Carlo Panizzera for $2,500. Carlo renamed the building the Union Hotel and began a tradition that continues today.
Carlo Panizzera’s life began in 1889 in the small northern Italian village. In 1917, he immigrated to California where he first worked as a cowboy in the San Fernando Valley, but he didn’t enjoy the heat of Southern California and so he jumped at an opportunity to move north.

Spaghetti
Carlo operated the Union Hotel as a boarding house and restaurant for stopover railroad passengers. One morning Mary Alberigi, his waitress, was carrying a load of linens from the hotel rooms upstairs down the steep, narrow stairway to the floor below. Under the load, Mary tripped and fell. Carlo found her, picked her up and carried her to the doctor. They were inseparable from that day on. The couple married on December 7, 1929 and on September 27, 1930, Mary Panizzera gave birth to their only child, Lucille. Mary and Carlo’s daughter Lucille grew up in the family business, playing in the Union Hotel’s restaurant and saloon, as her parents worked. On November 6, 1949, she married Dan “Mahoney” Gonnella. Lucille’s father Carlo died on July 31, 1977, and her mother Mary followed two years later. Lucille and Mahoney Gonnella managed the growing business together until March 8, 1992, when husband Mahoney passed away.
Although the hotel rooms upstairs were closed when the railroad stopped operating in 1929, the Union Hotel had continued as a restaurant and saloon. Mary Pannizzera’s great home cooking had become legendary and more dining space was now needed. A new dining room opened on Carlo and Mary’s 12th anniversary. The new addition connected the main building with the Bocce Ballroom, a large hall which had been framed with lumber from one redwood tree harvested from the Pannizzera’s ranch.

The year 1990 brought the addition of the Bakery/Cafe and the first Union Hotel Pizzeria began serving pizzas and pasta in 1992. In 1997, another Pizzeria opened in Santa Rosa, serving the same great Italian food at a second Sonoma County location. Then after several years of planning, The Union Hotel opened its third location at the intersection of Mission Blvd and Highway 12.  This restaurant opened its doors to the public on October 30th 2006.
Today, Lucille Gonnella is a living link to the history of Occidental. Her children and their families continue the rich tradition of these famous dining establishments, where the past seems to be the present, living on in the authenticity of the food and family.  These restaurants still draw visitors from near and far, many of whom remember going to Occidental as children.  The history of the Union Hotel is rich with the stories of the many guests who have enjoyed its fine Italian cooking.”

My verdict is that the food was pretty awesome, as well as the surrounding and ambiance. It was just like a regular weekend driving, relaxing and enjoying the day. Anyways, let me give a detailed explanation about the food.  The crust of the pizza I ordered was crunchy, the meat and vegetable rich in taste. My friend, Laura’s spaghetti has the right amount of sweetness to it along with the sauce, while the meatball is soft with a rich taste of meat and garlic. While the bread we got was soft and the garlic fries is not too salty.

After lunch, we left the Union hotel and walked around downtown, taking pictures of the building and some of the art on their walls such as the Occidental Town Map, where a painting of the map and directory of the town was painted. Then we visited some small stores selling various things ranging from a small supermarket to antiques and furniture.

Afterwards, we went up to a steep street leading up to the Occidental Community Church. It is known as the oldest building in town, built in 1876. The current tower and spire was built in 1976 for the old was demolished after the 1906 earthquake. The Community Church is known as the “Heart of Occidental”. According to their website, here is a brief history of the church:

“The church began as a Methodist Episcopal Church, but during the 1960’s, it began to decline until it closed it’s doors in 1972.  For two years it remained vacant, with the homeless finding protection from the weather.  Trudy, an antique store owner in Freestone wanted to preserve the church building as a community hall.  She entered into negotiations to purchase the building placing her antique store in the back rooms.
A group of local people still desired to have a Protestant church in Occidental.

Through the assistance of the American Missionary Fellowship, they were able to purchase the church for $4,000.00 which was much less than Trudy would have given. The dozen members began holding church services.  In 1974 they held a Vacation Bible School.  Rev. Jerry Hackett, then director of Mt. Gilead Bible Camps, preached on Sundays.  The tiny church began to grow.

In 1975 Rev. Linden Heath and his wife Janet had taken a sabbatical and lived in Occidental. Rev. Heath was asked to come and preach occasionally. The church board finally called him to be the pastor, paying him $35 per week. Pastor Peter Munson and wife Tracy came to Occidental in 1990 as the assistant to then-Pastor Linden Heath.  In 1993 Pastor Heath announced his retirement and in January 1994 the church called Peter to be the Pastor. Peter faithfully shepherded this flock until 2015.”

Unfortunately, the Church was closed at that time so we didn’t get the chance to look inside. However, we took several pictures of the building outside and went back to the main street where there were railroad tracks which mostly reminded everyone why downtown sprouted in the first place:

“Founded in 1876 Occidental is a small town nestled in the redwoods of Sonoma County between Freestone and Monte Rio in Northern California. It is approximately 68 miles north of San Francisco, 117 miles from Sacramento and 113 miles from San Jose. As of the 2000 census, the population was 1,272.

Occidental is a pretty little community with a two-block-long main street and plenty of charm. The village of Occidental began as a commercial center and the last stop on the North Pacific Coast Railroad, which connected Cazadero to the Sausalito ferry in the San Francisco Bay area. In return for donating right-of-way to the railroad, a local landowner named “Dutch Bill” Howards received a lifetime pass and a station was named after him.

The railway caused rapid expansion in the area, especially in the timber industry and by 1877 there were six sawmills in the Occidental region. Soon, the trains also brought vacationers looking to escape the summer fog in San Francisco or the heat in Sacramento. A few years later, two Italian restaurants were opened in the town and they are still in business today.” 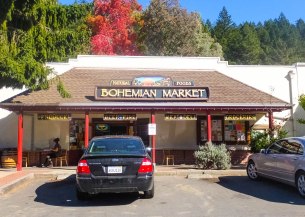 That is exactly what makes Occidental a small, charming town. People will come visit here to escape the bustling life in the city and we were one of them. After our brief tour of the town, we continued on to our next destination, Fort Ross at Jenner by the Sea. But unfortunately, we didn’t make it there due to time constraint. So instead, we decided to go to Fort Ross for our next visit.  Taking a highway leading us to 101, we headed straight home.