A very bright and wonderful day it was, another day for an exciting adventure. Claudine and I drove from San Miguel to Obando to see the dentist that my uncle recommended. After our checkup we decided to visit a very unusual site. I first heard of this unique site was during a Halloween special on a local show in the Philippines, a statue of a Devil slaying St. Michael located in the Tugatog Cemetery in the city of Malabon.

We finally reached the cemetery and entered its one way road. At first we were worried that we won’t be able to find the tomb but to our surprise it was easy to find. We found some bystanders hanging around the cemetery and ask for directions and they point us to the direction we were heading. We passed by the parked near it. We walk to the grave site and found the tomb of Don Simeon Bernardo (1869-1934).

We were supposed to take a couple of pictures and leave suddenly, as we look around few men approached us. They asked us if we own the tomb and they volunteered to clean it. We told them we were not and decline their offer. We tried taking some pictures but it was dark and the statue was barely visible. The growing vines were already covering the its cage.

One of the bystanders came and ask if we would like to have it clean so with no choice we told him “yes.” He cleaned up the vines and we had a clear view of the infamous statue. On may wonder what the purpose of creating this “thing.” Is the man buried underneath a devil worshipper? or something more. Here is the history I gathered from various sources online.

“The person buried in the tomb is Don Simeon Bernardo of Barangay Concepcion. According to his grandson, Don Simeon was a religious man, and a very prayerful person. He also expressly wished to have the statue placed over his tomb as symbolism and as a reminder that the society was continuously and slowly being engulfed by darkness, and that the devil is winning against goodness, and people is forgetting and setting God aside of their lives.

But behind that is the suffered a bitter life in Spanish Regime here in the Philippines. He was accused by being a filibusterer, and then put him in prison in Fort Santiago. He was also tortured their mercilessly, like some of the Katipunero’s. They also made him believed that God doesn’t exist and they indocrinated the belief of his children. Don Simeon died in 1934.

Now encased in iron bars to protect from stones thrown by people, the bizarre image of the devil beating down upon an archangel is an unsettling reminder of how society was back then. According to the Bernardo clan, they will reverse the statue and put St. Michael on top once they see that the world that their great grandfather witnessed has already changed from the one he saw decades back.”

The man took off the vines and that was it. He disappeared on one of the small holes around the cemetery.  We looked around and there are two plaques on each side of the gravesite. On our right was a sculpture of Adam and Eve and we guessed that it was the reminder of man’s first sin.

The other plaque on the other side was a conversation between Lucifer and Saint Michael. Here is the English version of the text:

On the left side

Lucifer: Why are you interfering here on earth? Didn’t you know I am the king here? I’ve taught Adam and Eve that is why there is humanity.

Saint Michael: Earth and Heaven are created by God. That is why our powers extends to here.

Lucifer: Conceited! Only my desires are follow and not yours! War, famine, gambling, all the craving of the human flesh I freely give! Even the followers of your God I can control. Still what are you doing here?

Saint Michael (prayer to himself): God, Oh my God of the heavens. Where is your power?

Saint Michael: People! Help me defeat evil, let justice and love to one another rule over us. Cast out any doubt, money and power where evil sprung!

A lot of people thought those verses came from the bible. But during Don Simeon’s years no commoners were allowed to have any bibles. The verses don’t exist in the bible recent research also showed. 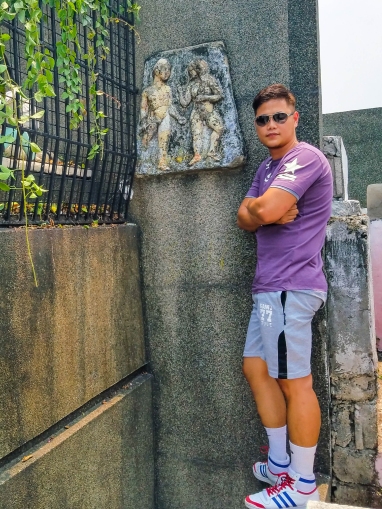 There were other rumors beside the owner of the tomb to be a devil worshipper. Other parishioners mentioned that the statue or the fork was getting bigger. According to sources the original fork was actually smaller, but was stolen during the 1970s and had to be replaced. Other stories were sometimes Saint Michael was on top and other more. There were no basis on these stories and most of them were rumors because Filipinos were highly superstitious people, they even throw rocks on the statue when they passed by it, that is why it was enclosed inside an iron cage.

It was a short visit but a remarkable one, beside, being one of the few statues of a devil inside a cemetery. Also, the man who had it build, his legacy on finding truth and goodness on earth still lives on. One might look at the statue and learn about its history and can compare the differences and similarities during Don Simeon’s time and today.

Its not historical but there was a bit of it in it and one with a moral lesson. Claudine and I left the cemetery driving to our next destination.