After our breakfast in our favorite diner Denny’s, we drove to the Glen Canyon Dam Overlook. I wasn’t sure what to find there but once we parked and walked down to the rails to the overlook Dad and Sam went to their separate ways hiking around the red rocks of the canyon while my Mom and I followed the path down to the overlook.

When I got there, there were some people taking pictures around and we did the same. The sight of the Glen Canyon Dam was indeed breathtaking from our view. It was the full view of the dam and the canyon itself. We could see the Colorado River flowing from both side of the dam. It was so high that if you have vertigo it is unwise to even come closer. While Mom and I took some pictures, Dad and Sam did some hiking around the area with its orange rocks and soil. Dad was so hyper we had to call him back when it was time to go. As we go to our destination here is the beginning of the history of the dam. 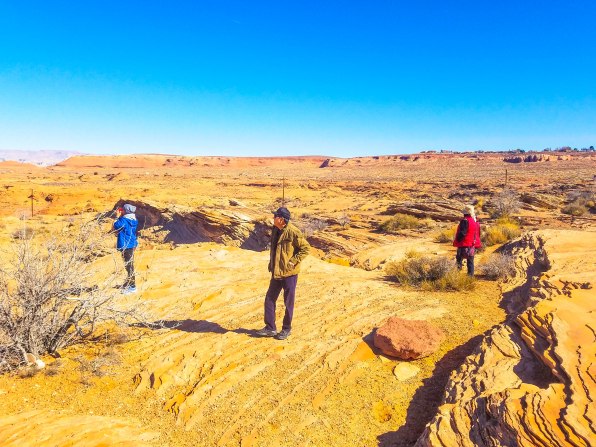 Family at the canyon

Railings down the canyon

“The authorization of the Colorado River Storage Project Act by Congress on April 11, 1956 initiated the construction of Glen Canyon Dam, the key unit of one of the most extensive and complex river resource developments in the world. The first dynamite blast in Glen Canyon occurred on October 15, 1956 when President Dwight D. Eisenhower pressed a telegraph key from Washington D.C. to set off the explosion signaling the beginning of construction.”

“Once completed, Glen Canyon Dam would provide vital water storage that would allow the Upper Colorado River Basin states of Utah, Colorado, Wyoming, and New Mexico to utilize their share of the Colorado River, especially during times of drought, while providing the required delivery of water to the Lower Basin states of California, Nevada, and Arizona.

When Reclamation engineers and geologists began looking for a suitable location to build Glen Canyon Dam, several criteria had to be met: the area forming the basin could contain an immense amount of water, the canyon walls and bedrock foundation were strong and stable enough to safely support the high dam, and the dam must be economically feasible to construct. Glen Canyon proved to be the perfect location, although because it was such a remote site, it presented some unique construction challenges.

Because there were no rail facilities near the construction site, a bridge was built to allow trucks to deliver material and equipment across the canyon. Construction of the 1,271 foot-long steel-arch bridge 700 feet above the river, was completed in January 1959, reducing a 200-mile trip to cross the river to less than a quarter mile. State highways were extended to the remote construction site and the Glen Canyon Bridge was constructed across the Colorado River to join the highways. Subsequently, the bridge was transferred to the state of Arizona.”

It didn’t take much long to reach the dam’s visitor center. Today, it seems there were plenty of people but we managed to find a parking spot. The center was still surrounded by the orange canyon and we walked to the entrance and as we do, here is a brief introduction to the man the visitor center was named after.

“In 1957, Reclamation constructed a government camp close to the dam site in northeastern Arizona to house construction workers and their families and to provide community services. This community called Page in honor of Reclamation Commissioner John C. Page. Reclamation managed the community of Page during and after construction of the dam until the town was transferred to private ownership pursuant to the 1974 legislation authorizing incorporation. Page became an incorporated town on March 1, 1975.

In order to construct the dam, the Colorado River had to be channeled around the site. A coffer, or temporary dam, was constructed upstream of the dam site to redirect the river through two, 3000 foot-long, 45 foot diameter diversion tunnels dug through the walls on each side of the canyon. The material excavated from the tunnels was used to make the coffer dam. With the river diverted, crews began work to excavate down 137 feet to the canyon’s bedrock for the dam’s foundation, and concrete placement began in June 1960. The concrete was transported in 24-ton capacity buckets via an aerial tramway strung across the canyon from a concrete mixing plant constructed nearby.“

Construction of the dam

We walked in, Sam and I went to the exhibit to learn more about the dam and we were busy looking around when we noticed that our parents weren’t there. So we walked back to the Souvenir Store which was on the other side of the entrance. They were already busy picking what to buy that I have to convince them to buy it later. They reluctantly did and we went to the exhibit and looked around. Since we missed the tour for that hour and we could not wait for the next one we spent our time doing our own self tour. Reading the information and taking pictures of the dam from the giant glass window. Here is some history of the dam.

“Construction continued 24 hours a day until on September 13, 1963, the last of over 400,000 buckets of concrete was placed. Glen Canyon Dam emerged from bedrock incrementally, as a series of blocks seven and a half feet high and up to 60 feet wide and 210 feet long, reaching a full height of 710 feet. Prior to reaching completion, Glen Canyon Dam began impounding water in March 1963 when the diversion tunnels were closed and Lake Powell was born. Due to the vast capacity of the reservoir, it took 17 years for Lake Powell to completely fill for the first time. On June 22, 1980, Lake Powell reached elevation 3,700 feet, with a total capacity of over 26 million acre-feet.

Installation of the powerplant equipment began after the dam was completed and the first hydroelectric power was generated on September 4th, 1964. By 1966, all eight generators had been installed and were working at full capacity. On September 22, 1966, the nation’s First Lady, Claudia “Lady Bird” Johnson, dedicated Glen Canyon Dam and Powerplant. Reclamation also constructed a switchyard at the dam, two 345 kilovolt (kV) transmission lines to Phoenix, Arizona and a 230 kV line to Farmington, New Mexico. In 1977, Reclamation’s power marketing and transmission functions were transferred to the Western Area Power Administration (Western).“ 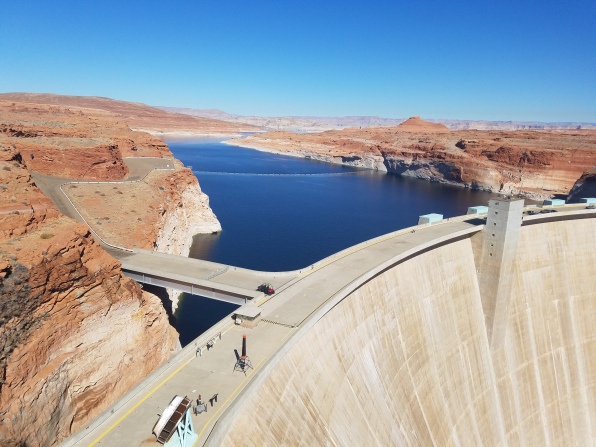 the bridge to the center 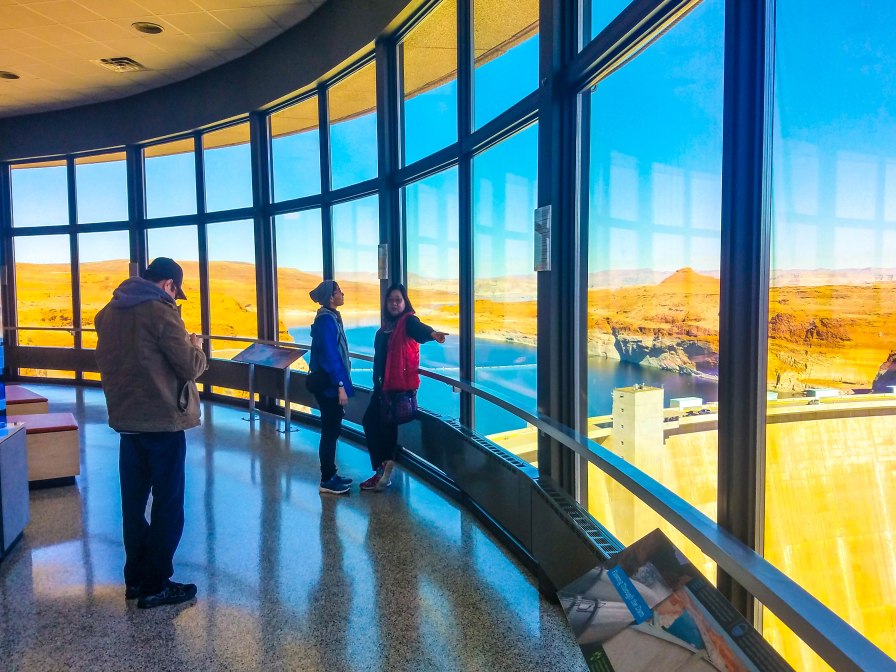 Then to get a closer view we walked to the back and went out in the back where we got a closer view of the dam. We took more photos and then they hurriedly went back to the souvenir store. I stayed for a while and took more pictures with Dad. Then we followed Mom and Sam. They got the stuff they first picked up earlier and more. As we end our journey to this dam. Here is the rest of the history of this man made marvel.

“On either side of the dam are spillway tunnels constructed through the canyon walls measuring 48 feet in diameter at the intake point reducing in size to 41 feet in diameter. These spillways are used to release large quantities of water that exceed the combined release capacity of the powerplant and river outlet works. The spillways were used in 1983 when unpredicted weather patterns altered forecasts dramatically and caused a sudden and unforeseen high magnitude runoff. The extremely high water releases through the spillways caused cavitation damage in which the concrete in the tunnels was eroded. Subsequent redesign and reconstruction of the spillways incorporated new state-of-the-art technology in which “air slots” were built into the tunnels to eliminate the potential for cavitation.

During the unusual hydrologic circumstances of 1983, Glen Canyon Dam was never in danger of failing. Glen Canyon Dam, like all Reclamation dams, was constructed to the highest standards in the industry and has undergone continuous, exhaustive inspection and analyses. Reclamation’s Dam Safety Program standards have been peer reviewed and approved by dam safety experts from the Association of State Dam Safety Officials and other federal agencies.

Prior to the dam’s construction, extensive geologic studies were completed and then reevaluated in 1985 to determine if, following construction and filling of the reservoir, conditions had changed. No changes were identified. Seven complete studies were done in 1982, 1984, 1989, 1995, 1999, 2001, and 2004 under Reclamation’s Safety Evaluation of Existing Dams Program. All Reclamation dams are evaluated according to state-of-the-art engineering and geological standards.”