Facade of the theater 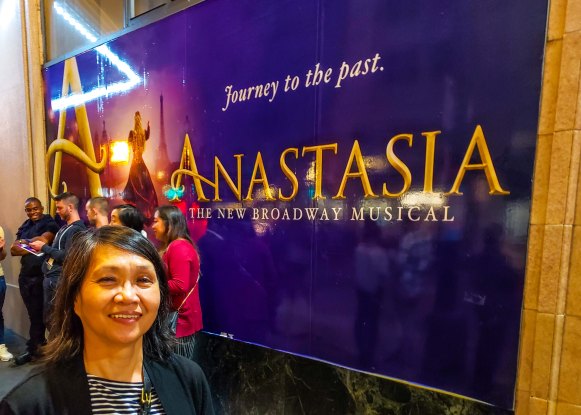 Today was a short blog because basically, it was about a theater. There were plenty of theaters in the city of San Francisco and the Bay Area. The reason that I’m going to talk about this particular place is that this is where Ta Vans and I will be watching a Broadway musical. The classic Anastasia, a 20th Century Fox animated film redevelops for Broadway. I will admit I had the soundtrack when the musical play hit Broadway.

My aunt and I took the bart from her place and went down to Powell and from there we hurriedly walked a couple of blocks to our destination. It was a landmark in the area, survived the test of time and still relevant to this day. As we walked here is the beginning of the history of the place.

“The RKO Golden Gate Theatre had a ‘sister’ theatre in Los Angeles the RKO Hillstreet Theatre of 1922.

The 2,300-seat Golden Gate Theatre was built in 1920-21 and was designed by G. Albert Lansburgh for the Radio-Keith-Orpheum (RKO) theater circuit; Lansburgh also designed the nearby Warfield Theatre at about the same time. It was equipped with a Wurlitzer 3 manual, 13 ranks theatre pipe organ It opened in March 26, 1922 with vaudeville on the stage and Wanda Hawley in “Too Much Wife” on the screen.

Unlike the other plays we went to, this one was already crowding with people. It was getting dark so we joined the other crowd in getting in after taking a couple of pictures. We went inside and I was disappointed, it’s plain and compares to the Orpheum Theater this one was nothing. We showed our tickets and climbed up the stairs and to the snack bar. We went in line thinking we were buying Anastasia souvenirs but instead, we got drinks of vodka and tea with the simple SHN and then we went to our seats.  As we sit here is the continuity of history. 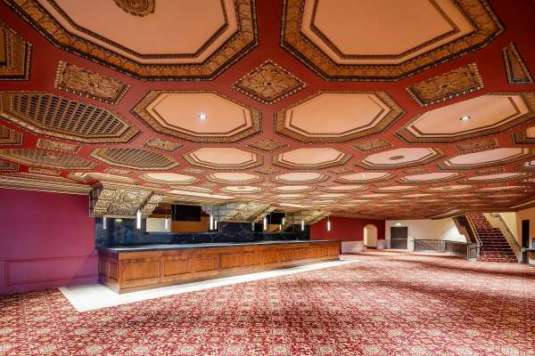 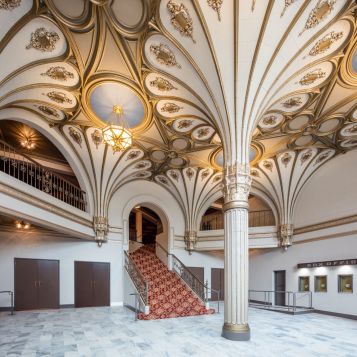 In the following decades, the theatre presented such performers as The Andrews Sisters, Louis Armstrong, Judy Garland, Nat King Cole, Roy Rogers, The Three Stooges, Ethel Waters and Frank Sinatra, before RKO converted it in 1954 to present films, leasing it to the Cinerama Corporation.

By the time it was shuttered, the Golden Gate Theatre had already been converted into a two screen theatre on December 21, 1966, with the balcony theatre known as the Penthouse Theatre, opening with Jean-Paul Belmondo in “Is Paris Burning”. With the twinning it suffered little permanent damage as it was later restored to a single auditorium by the Shorenstein Hayes Nederlander group.

When it was finally renovated and reopened in 1979 into a performing arts center, the original detail and look of the theatre was restored as well. Although the neighborhood has remained a little seedy, the theatre is still very grand, with two marvelous Art Deco style vertical signs that are nearly 4 stories high.

Like the entrance, the main stage and the seating area was also not fully ornated, unlike the Orpheum. We picked up our brochure and we were ushered into our seats, and I looked around as we wait for the opening of the play. Unfortunately, there was no photography or videotaping and as we wait here is the rest of the history.

At the bar with drinks 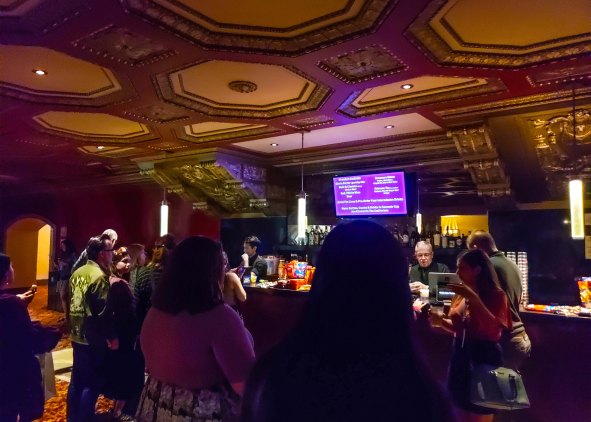 Today, the Golden Gate Theatre is still a premier venue for traveling Broadway shows and a visual journey into San Francisco’s gilded past. Renovation began in August 2017 to the plans of architectural firm ELS Architects who returned the theatre to its original 1922 opening condition. It reopened on September 11, 2018, with “On Your Feet”.

The Golden Gate and the San Francisco Orpheum are owned by BroadwaySF, a theatrical producing company owned by Carole Shorenstein Hays and Robert Nederlander; the company bought the Golden Gate in 1979 and mounted a total renovation for use as a theatre for plays and musicals.” 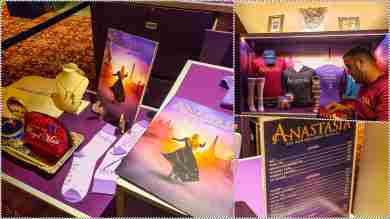 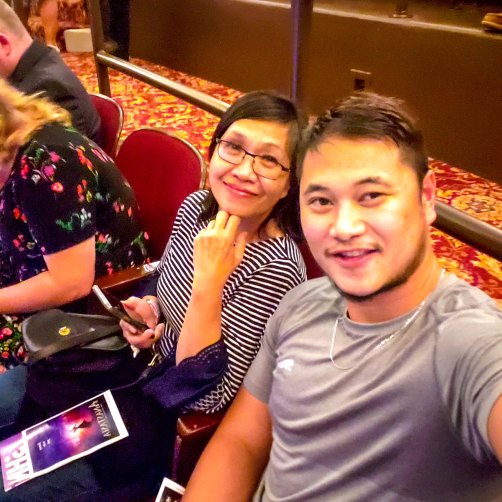 Also, here is a summary of the play. If you guys watch the 1997 version this is slightly a different version. Another note the pics are from the Anastasia Broadway Tour.

“Based on the beloved animated movie from 20th Century Fox, Anastasia is both a heartwarming and heart-wrenching dive into one of history’s biggest unanswered questions: what happened to Grand Duchess Anastasia Romanov? Set amidst the turmoil of the Russian revolution with the Bolshevik regime on the rise, Anya, an amnesiac orphan stranded in what was once the Russian capital, St. Petersburg, is on a quest to rediscover her past which she believes lies in Paris. Joined by a dashing conman, Dmitry, and an ex-aristocrat, Vlad Popov, who want to use Anya to bamboozle the only remaining Romanov, Dowager Empress Marie into believing that Anya is the lost Anastasia, she escapes to Paris with a determined Soviet officer on their heels.

Including classic songs from the motion picture like “Journey to the Past” and “Once Upon a December”, Anastasia explores one determined girl’s journey to find home, love, and family as she discovers who she was and embraces who she is meant to be.”

During the intermission, we bought our shirts and we went back to our seats to watch. The link below is more detail information about the play. In the end, we took some more pics and videos and walk back to the Bart station and wait for our train.